"He's dead“, the man with the curly black beard said. He was standing in front of his shopping cart surrounded by plastic bags, blankets and clothes.

"What?" somebody gasped. The two women started to sob.

"When you get that flesh-eating disease, there's nothing you can do," the man said after a while.

The one-legged woman with broken teeth had moved her wheelchair in and out of traffic all morning, panhandling with a cardboard sign that read "Anything helps“. She was only in her forties, but looked much older than she was.

"At least he's not suffering any more,“ she said. "Damn, I loved that man like a brother,“ the man with the beard moaned. "What was his last name?"

Somebody tacked a picture of their dead friend, a cardboard sign with his name and some flowers to a tree. The other woman had just shot her first bag of heroin for the day. When they weren't begging or shooting heroin, they drank cheap booze, smoked crack or cigarettes.

Their dead friend had been the leader of the island for many years. He had taught them how to word their signs, how to survive in the downtown traffic, where to find shelter. He often gave away his last sandwich, or his last shot of heroin. He took care of the others. He had mild, brown eyes and was good-natured, with a permanent smile and a soft voice.

'We watch out for each other,' he used to say. 'Who the hell else will?' His friends said that he always made them think things could be OK. He was kind of their heart.

That afternoon, the bearded man and the woman decided to go to the hospital to identify their friend to make sure it was really him.

"Who was he?" the woman asked. "He was a doper most of his life," replied the man. "Where from?" "No clue. His dad was a drunk and left the family. His mother died in an apartment fire. Cigarette. When he was 10, his grandparents took him in. But then he dropped out of high school and got out." "No job?" the woman asked "Yeah, a few odd ones here and there. Started smoking pot started early, then heroin. Drifted around. He was all over the place."

At first the morgue attendant tried to chase them away. "I'm his stepbrother," the bearded man lied. "Wait here," the attendant said. After a few minutes a door opened and there he was: laid out on a bier in a white body bag, his face uncovered. It looked as if he was smiling.

"He asked the doctor to give you this," the young man said. "He said he wouldn't need it anymore."

The woman slowly opened the brown paper bag. In her hand she held a tiny chocolate bar. They stood several minutes, staring at the peaceful face.

The attendant had been waiting patiently at the entrance. He watched them carefully.

"Love never fails,“ the young man said and stepped towards the bier. "My father can show you ways out of this,“ he said in a calm voice.

The bearded man and the woman looked at each other for a few moments.

Then they walked out silently. A little later they left the morgue and followed the attendant. For a brief moment the sun peeked out from behind the clouds. They did not return to the island. 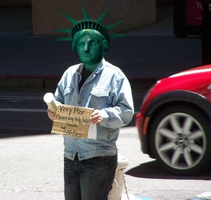