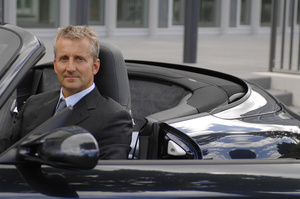 "Don't be late for dinner," his wife said as she kissed him goodbye on the doorsteps. "You know that we have tickets for the concert tonight."

"Don't worry," the man in his early forties replied. "I'll be in time."

It was barely 7, and the morning sun made his wife's pretty face even prettier. They were high school sweethearts. Love at first sight. The best thing that had ever happened to him.

He was in the mood for taking the Porsche to get to the office. He pulled out of his driveway. Went down the street. The ocean was sparkling like a jewel as he made his way to the freeway. He was in very good spirits: a wonderful wife, two great kids doing well at school, a house by the sea. What else could he possibly wish for?

The streets were quiet this time of day. It took him a mere 20 minutes until he pulled into his parking spot at the bank. He had been working there for almost twenty years. Promoted three years ago to head of department. A corner office. Parking privileges. Life was good.

He was one of the first to enter the office. This was his favourite time of day. He could manage a lot without disturbance, before most other colleagues turned up.

It was an ordinary morning: two meetings, staff appraisals, phone calls, e-mails, customer pitches and deskwork. After lunch he had to give a presentation, therefore he only had a little snack and coffee.

Later in the afternoon he took care of some paperwork, but fortunately it was just another hour before clocking off. He was looking forward to going home.

The ping of an incoming e-mail broke the silence. He glanced at it, and it took his breath away. Within seconds he was overcome with panic: We regret to inform you … the economic situation forces us … restructuring of our banking group … your displacement … we wish you all the best for your future endeavours.

He was shocked. Speechless. His walking papers. After eighteen years. He could not believe it. What now? His family, his home, the expensive private school? A thousand thoughts raced through his mind. His head was spinning. He needed some fresh air.

A couple of blocks down the street he went to a bar and had a drink. What would all this come to? Unemployed. The mortgage was due. He did not know how to explain it to his family. He felt ashamed. How could this happen after so many years?

He left the bar and walked through the streets, until he did not know where he was any more. Wandering around aimlessly. This part of town was unknown to him. His head was pounding, ready to burst. It was getting dark and rain set in. No, he was not able to go home. Other than his family, what would his relatives and friends say?

At the end of a street he made out the outlines of a crowd of people. He could not see clearly. When he moved closer, he realized that people were queuing up in front of a building. His steps slowed down. There were mostly men waiting for something, many of them in rags and carrying plastic bags. Two women kept all their belongings in a shopping cart.

An old man turned around and spoke to him, "Hi, mate, it won't take long. They give you a warm meal and shelter for the night. Real good." He smiled, flashing a row of broken teeth.

The young man did not know what to say. Never before had he spoken to people like that, let alone notice them.

"I lost my job today," the man with the tie answered quietly.

"Oh, dear, I joined the dole queue many years ago," the homeless man said.

"If I remember correctly, you know… the dope and the booze. It’s all a blur."

"What happened then?" the young man asked curiously.

"Well, our home was foreclosed on. And a few months later, my wife ran off with another guy. From then on I had to live on the streets. There was no other way out. Meanwhile my kids want to have nothing to do with a doper and wino."

"How did you cope with daily life?" the banker inquired.

"Brother," the homeless man replied, "do not worry about everyday life, what you will eat or drink, or what you will wear. Is not life more than food, and the body more than clothes?"

The young man was surprised by the wino's words. For a while he looked at him silently.

After a few minutes they had reached the doorsteps of the building. The old man entered. The man in the suit hesitated. He looked at the bearded man. Then he turned around and disappeared down the street. Moments later he was gone. His silhouette swallowed by the dark. 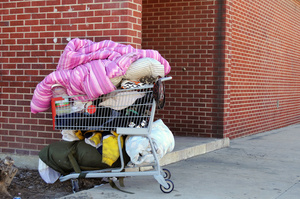